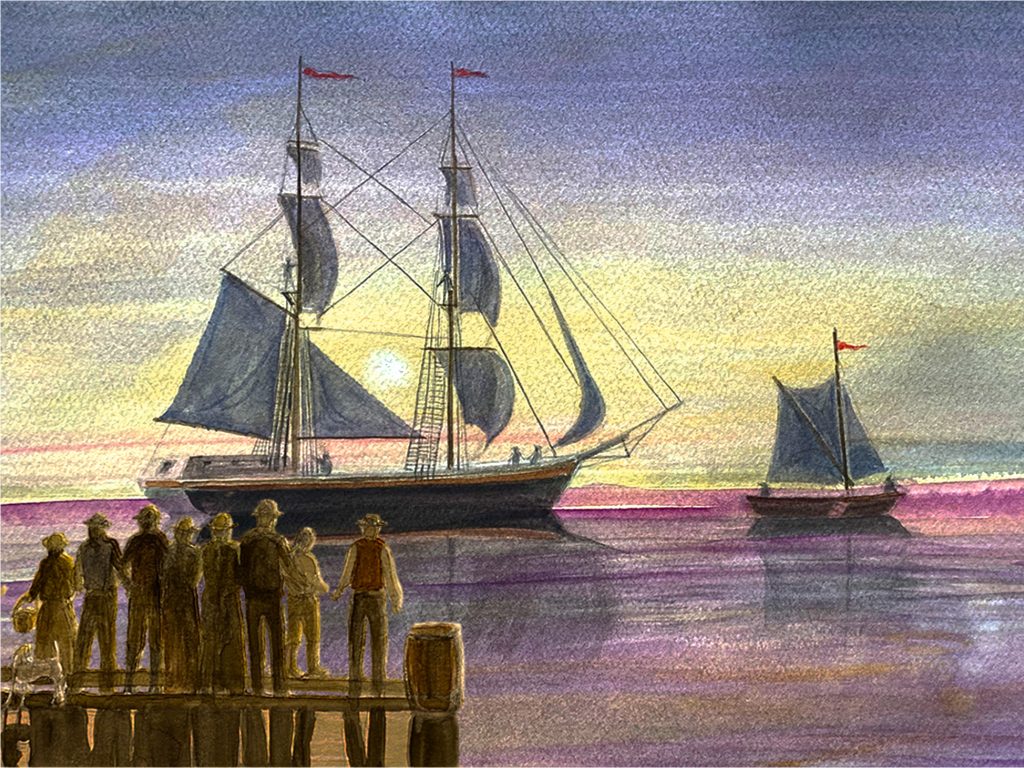 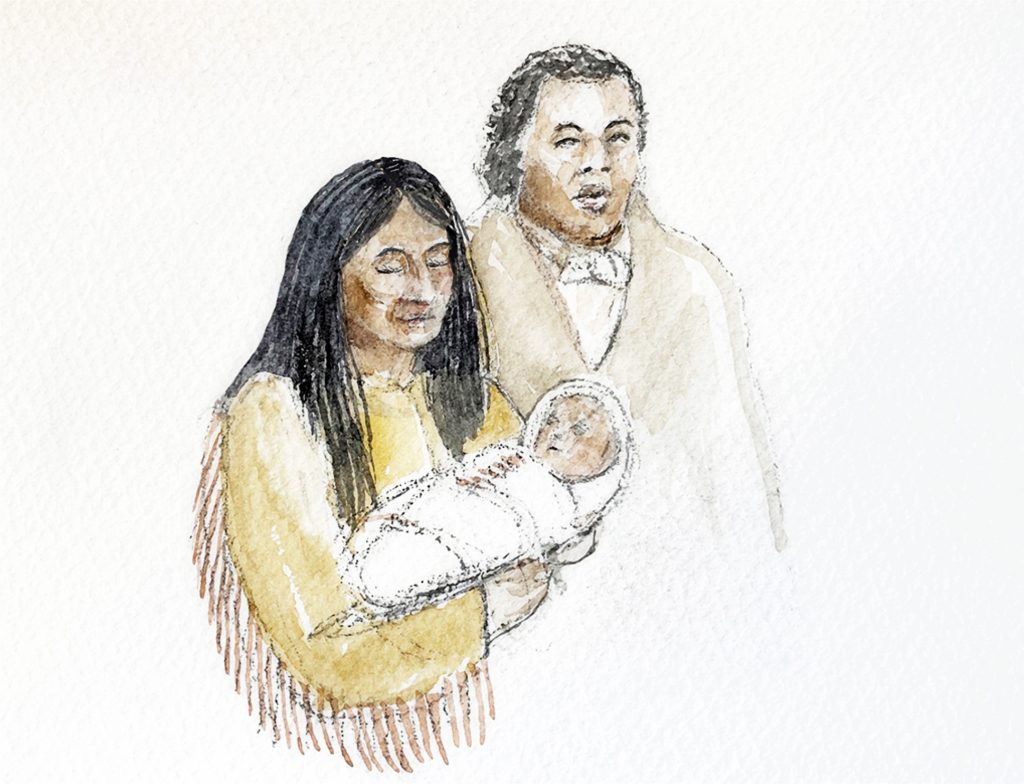 END_OF_DOCUMENT_TOKEN_TO_BE_REPLACED

Paul Cuffe evolved from an unschooled child living within the Wampanoag community on the South Coast of Massachusetts into a charismatic and inspirational leader widely known and respected on both sides of the Atlantic. He was born on the island of Cuttyhunk in 1759, the son of a freed slave and a Native American woman. He was largely self-educated but attained a high level of literacy and writing abilities. He learned other skills such as navigation and shipbuilding through on-the-job experience. Within the short lifespan of fifty-eight years, Paul Cuffe became a widely respected leader in many organizations and causes devoted to abolition of slavery, bringing progress to the people of Africa and supporting Quaker groups in America and England to improve the lot of their fellowman.

Throughout his life, he built powerful relationships with key people in America, England and Africa that were most helpful in advancing the causes to which he was committed. Two of the most important of these relationships were with two very different families on the South Coast of Massachusetts: the Rotches, a prominent and wealthy Quaker family of Nantucket and New Bedford, and the Wainers, a humble Native American and African-American family of Dartmouth and Westport.

END_OF_DOCUMENT_TOKEN_TO_BE_REPLACED

Capt. Pardon  Cook (1792-1849) Son-in-law of Paul Cuffe, resided on Drift Road, Westport. Whaling captain, commanded the June and Elizabeth. An 1843 profile in The Liberator stated that Cook disproves “the charge of his being indebted for his abilities to any white blood he possesses, for few are darker than he. He has performed three voyages from Westport as a master, and in every instance has succeeded in making good voyages, better than any other vessel from the same place, considering the amount of capital invested.”

END_OF_DOCUMENT_TOKEN_TO_BE_REPLACED

Transcriptions from the Minutes of the Westport Religious Society of Friends

Requesting and being received into membership in the society:

1808 2nd month. Inform that Paul Cuffe requests to come under the care of friends, We therefore appoint Jeremiah Austen, Prince Wing, and Abner Potter to visit him and take a solid opertunity with him in order to discover the motive and sincerity of his request and fitness to become a member of our Society and report to next meeting. P. 111.

1808 4th month. The committee in the case of Paul Cuffe’s request reported that they have had several opportunities with him and he appeared to them to be sincere in what he has requested, therefore after considering thereon we do with the concurrence of the Women’s meeting receive the said Paul Cuffe under our care as a member of the society, of which Prince Wing is to inform him. P. 114

END_OF_DOCUMENT_TOKEN_TO_BE_REPLACED 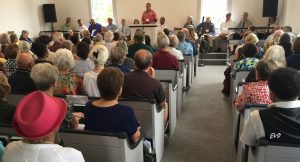 150 people gathered on Saturday September 16 2017  to commemorate the 200th anniversary of the passing of local hero Paul Cuffe. The town of Westport declared September 16 as Paul Cuffe Day and proclamations from Governor Baker and other citations and recognitions were presented to mark this occasion. The symposium covered many new perspectives on Paul Cuffe and his business partner and brother-in-law, Michael Wainer, and their families.

END_OF_DOCUMENT_TOKEN_TO_BE_REPLACED

An overview of images that have been used to represent Paul Cuffe by Carl J. Cruz

This Portrait, oil on canvas was commissioned in 1989 by the Hall of Black Achievement at Bridgewater State University. The Artist is Larry Johnson an African-American illustrator. Mr. Johnson used the 1812 silhouette as his model and brought this realistic image to life.

View slides from this presentation HERE.

View video of this presentation HERE.

“he was “both tall and stout” spoke good English, and dressed “in the Quaker style” that is, he adorned “a drab-colored suit” with a large “flapped hat”.  Thomas Clarkson, The History of the Abolition of the Slave Trade 1808

“His person is tall, well formed and athletic; his deportment conciliating, yet dignified and serious.” Liverpool Mercury 1811    “Memoirs of the Life of Paul Cuffee, the Interesting Negro Navigator” 1811

END_OF_DOCUMENT_TOKEN_TO_BE_REPLACED

A video of this program can be watched HERE.

By Tony Connors, President of the Westport Historical Society

We see her name on the street sign in the center of Westport: Charlotte White Road. She is mentioned in local history books as a healer, a midwife, a poet.  But what do we really know about Charlotte White?

Let’s start with her name. The typical pronunciation of the name Charlotte is “Shar-lot” but there is a local oral tradition that it was pronounced “Sha-lot-ee.” How did Charlotte herself pronounce her name? The first clue was found a few years ago when the late Bill Wyatt, former president of the Historical Society, was researching the 19th-century account books of the Westport physicians Eli and James Handy. Bill found an entry for “Charlotty White,” a phonetic spelling of her name that indicates a three-syllable pronunciation. The second clue can be found in the town records regarding early poor relief in Westport. Several town records from 1812-1813 refer to her as “Cholata” White, which drops the “r” (as most locals from Massachusetts and Rhode Island do) and flattens the final “e” to “ah,” but clearly shows the three-syllable form. Based on this evidence, it is most likely she was called “Sha-lot-ah.”

END_OF_DOCUMENT_TOKEN_TO_BE_REPLACED

by Richard Gifford and Tony Connors

The best-known citizen of Westport is Paul Cuffe, a master mariner with African and Indian roots who rose to prominence as a captain, ship-builder, entrepreneur, philanthropist, and advocate for civil rights and school integration. Less well known is Pardon Cook, also an accomplished master mariner from Westport, who commanded more whaling voyages than any other person of color in the nineteenth century, and whose life intersected with that of Paul Cuffe through maritime ventures and marriages.

Pardon Cook’s heritage begins in slavery. His ancestors were slaves of the Almy and Cook families of Tiverton, Rhode Island—some of whom were not only slave owners but also engaged in the slave trade in Newport. Many of the slaves and free blacks of this area intermarried with Wampanoag Indians. Both groups were socially and economically marginalized and found refuge and community with each other.