A new book about Paul Cuffe, written by David Cole, Richard Gifford and Betty Slade, with illustrations by Ray Shaw, has recently been published by Spinner Publications of New Bedford. The title of the book is Paul Cuffe: His Purpose, Partners and Properties. The book focuses on clarifying or resolving uncertainties about three aspects of Paul Cuffe’s remarkable life: the purpose of his travels to Africa; the nature of his relationships with several important persons who contributed significantly to his success namely his father, Cuff Slocum, his business partners, William Rotch Sr. and Jr. and Michael Wainer; and the various properties that Paul and Michael owned in and around the town of Westport—including their locations, how and why they were acquired, and the purposes for which they were used. The three authors are joined by Joseph Thomas, the head of Spinner Publications, in a discussion of this publication both in terms of what’s new and how this book complements the forthcoming book by Lamont Thomas about Paul Cuffe that will soon be published by Spinner.

PAUL CUFFE, HIS PURPOSE, PARTNERS AND PROPERTIES from Westport Historical Society on Vimeo.

A slideshow for young audiences narrated by Cuffe descendant Robert Cox about the life of Paul Cuffe, written by David Cole and Betty Slade and illustrated by Ray Shaw for Westport Historical Society. Westport, Massachusetts

The Farm was known as the Wainer Farm by visitors, but by close friends and family it was known as “The Country.” It was the center of all family activity and special events. You had a better chance of seeing the family by going to Westport than to New Bedford.

1. The Importance of “The Country”

I was born on Thanksgiving Day, November 27, 1947. I was taken for the first time outside to stay all day on March 20. I was taken to the country to see GaGa on March 22. 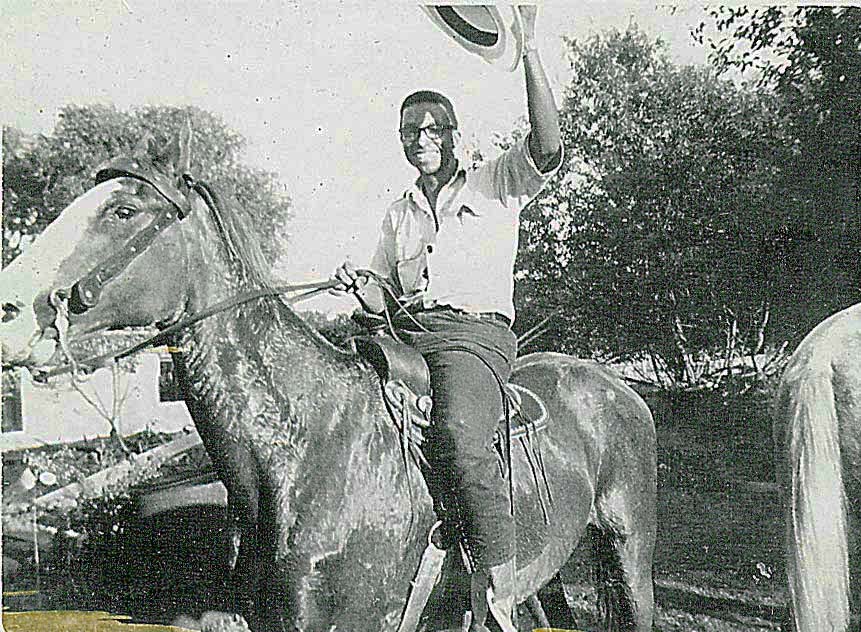 George H. Wortham Jr. (the author) on Red
My goal has been to record as much of the family history as I can, from the written documents and from the oral tradition that I was fortunate to get firsthand and hand it down to the next generation. I hope that someday when we all get together, my grandfather, Michael Quaben and my uncle, Paul Cuffe will invite me to sit with them for a while and introduce me to the rest of the family and thank me for keeping their names in front of the family so that others in the family would know who they were.

The philosophy of the Wainer-Gonsalves family was “to spare the rod you spoiled the child.” We heard this statement all the time and it was held to. When Carol, my wife, and I were in Phoenix, AZ during a sales meeting a couple of years ago we took a tour of the area. Our guide started to tell the group about the customs of the Navajo. He said the Grandparents raised the children while the parent provided for the household. An uncle would administer the spankings and not the parents because this separated the confusion of the loving relationship from the necessary need for punishment. As he talked I saw no difference in the way I was raised in The Country. The only difference I saw was that any adult would administer the spankings when necessary in the Wainer family. If you were doing something wrong and an adult disciplined you, you hoped it stopped there and did not get back to Momma or Nanna because you got another spanking when you got home. The one thing that I never heard growing up was “wait until your father comes home”. Discipline was done then and there. The women spanked us but ToiToi had us work on the rock pile. The farm grew stones and we would pick them up in pails and carry them to a pile so that they could later be put on the drag and dumped in the lane to form a foundation. It was like working on the chain gang and you smarted up fast. Other things that were not tolerated by Nanna or Mom was talking back, rolling one’s eyes, and sucking the teeth or anything other than responding to what you were told immediately. Running from a whipping only compounded the whipping. Nanna didn’t forget but you would and when you got ready for bed she would wait until you were in your nightclothes and then beating would start. The kids that were not part of the proceedings had to get out of the way because anyone within reach of the switch got it. No apology was offered for the ones that received unintentional punishment because it was thought that you probably had done something at some time and had gotten away without punishment.