Paul Cuffe is clearly the most widely known historical resident of the Town of Westport, Massachusetts.  An impressive number of books and articles have been written about him, he has been cited in many books, papers, and newspaper articles, and his deeds and achievements have been celebrated in diverse places, especially those relating to black history and the struggle against slavery here and in Africa. A park in New Bedford memorializes his life and there are schools named in his honor in Providence, R.I. and Chicago, Illinois.

However, there has remained an unresolved issue for half a century as to the correct location of Paul Cuffe’s homestead and shipyard in the Town of Westport.

We, the authors of this paper, recently published a book that explored several matters relating to Paul Cuffe, one of which was the location of his homestead.[1] In this paper we attempt to put this issue to rest by clearly demonstrating the correct location of Paul Cuffe’s homestead at what is now 1430-1436 Drift Road.  We also trace the historical ownership of the 1504 Drift Road property and show that it was never owned by Paul Cuffe as claimed by some and recorded as such in the National Registry of Historic Places.[2]

In December 1973, a nomination form was submitted to the National Registry of Historic Places of the US Department of Interior claiming that a property at 1504 Drift Road, Westport, Massachusetts, was “Paul Cuffe’s Farm.”[3]

On August 7, 1974, a local area newspaper published an article that stated, “the ‘Paul Cuffee house’ the Interior Department’s press release describes appears not to have been his house at all. The present owner, B. Philip Lozinski, says (with some heat) that he informed a department investigator that his house was not the Cuffee house.  Attorney Richard Paull, a well-informed student of local history, agrees with Mr. Lozinski.”[4]

The 1974 article goes on to say, “The researcher from ABC cited a newspaper article by a former owner of the Lozinski house as her authority. Dr. Frank J. LePreau Jr. the former owner, is now a resident of Hyden, Ky. He could not be reached for comment Monday… Myrna Harris, who did the site inspection for ABC, said ‘The key thing was the farm and docks. The house seemed to be a bonus, and I was delighted to find the newspaper article confirming Cuffee’s ownership.”[5]

In September 1988, the Westport Historical Commission (WHC) submitted a Form B document to the Massachusetts Historical Commission to register the building and property at 1504 Drift Road.  The Form identified the house as the Capt. Tillinghast Tripp House.[6] The form was prepared by Barbara W. Koenitzer, a long-term resident of Westport and member of the WHC. The Form B states under the section entitled National Register Criteria Statement:

“This property was designated a National Historic Landmark in 1980 as the property of Captain Paul Cuffee, a noted black sea captain… Local historians, however, find no evidence that he ever owned this property, although he owned nearby plots where the houses no longer exist from his day.”

In 2000 there was an exchange of messages between Denise Meringolo, a graduate student at The George Washington University, and Patty Henry of the National Park Service wherein Ms. Meringolo was seeking information on how the decision had been made that the property at 1504 Drift Road had been Paul Cuffe’s Farm.[8] Ms. Meringolo commented, in her message of July 3, 2000, as follows:

“I am very interested in the fact that the owner of the property resisted Landmark designation rather firmly for at least five years. Then, in 1979, he apparently changed his mind. However, there is no indication in the file if he had received convincing information or if he just decided it did not matter.”

No further action appears to have been taken by the National Park Service on this matter since that time.

Paul Cuffe purchased three properties in 1789, 1800 and 1813 that constituted his homestead when he died as shown in his inventory. The three purchases were as follows:

In the inventory of Paul Cuffe’s Estate compiled by John Mosher, Abner Brownell and Tillinghast Tripp, dated October 2nd, 1817, shortly after Paul Cuffe’s death, and submitted to Hodyah Baylies, Judge of the Court of Probate on December 2, 1817, the three most valuable items listed were:[13]

The most significant point of these entries in the inventory for the purposes of this paper is that the property identified as his homestead is said to contain four and one quarter acres which is consistent with the area of the three properties listed above. It also included a house, wharf and other buildings which lends credence to the understanding that this was the location of his wharf and shipyard.

Determining the location of the three properties listed above provides the key to identifying just where the homestead property was on the western bank of what was then known as the Acoaxet River. The three properties previously belonged to three different, but closely related, members of the Soule family. Isaac Soule and Lemuel Soule were cousins and David Soule was the son of Isaac Soule from whom he inherited the property that he sold to Paul Cuffe. Paul Cuffe’s initial purchase of 35 square rods on the river front was at the southeast corner of Isaac Soule’s homestead. His second purchase of 15 square rods was at the northeast corner of Lemuel Soule’s homestead. These were two abutting properties, so the key to finding the location of Paul Cuffe’s homestead is to determine the property line that lay between them. Since David Soule’s property was inherited from his father and abutted Paul Cuffe’s existing property, it simply lay along the boundary between the first two properties.

The original property holdings of members of the Soule family were recorded by the surveyor, Benjamin Hammond and then depicted on maps drawn by Henry Worth based upon the surveyors’ records.[14] 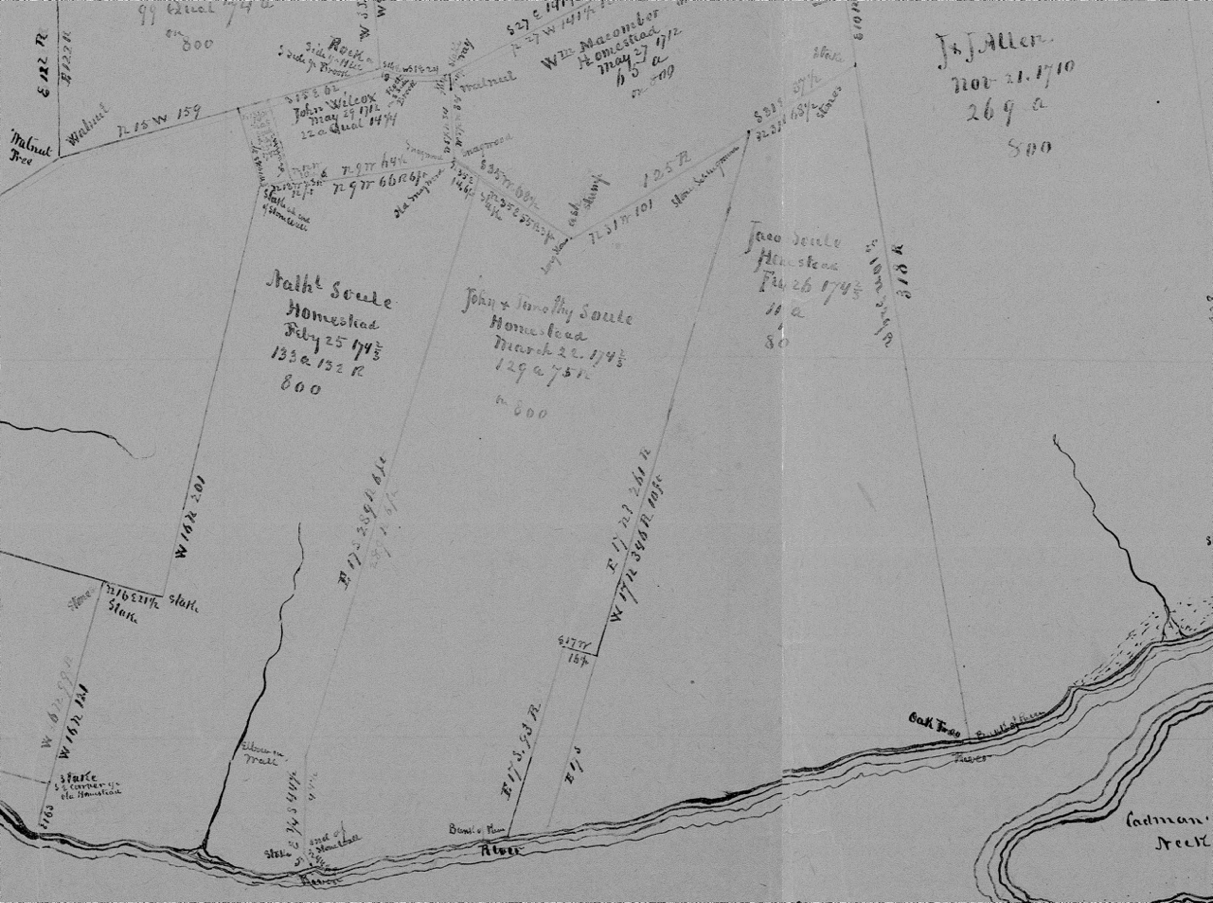 Figure 1. Map of Property Holdings on the West Bank of the Acoaxet River as drawn by Henry Worth

The first map depicted in Figure 1 shows three large holdings of Jacob Soule, John and Timothy Soule, and Nathaniel Soule based on surveys done in February and March 1742/3. These properties had originally belonged to their grandfather, George Soule, who was a Mayflower passenger and original settler in the Plymouth Colony.[15] This map also shows the 269-acre property of J. & J. Allen, which later figured in some of other Paul Cuffe’s property holdings. 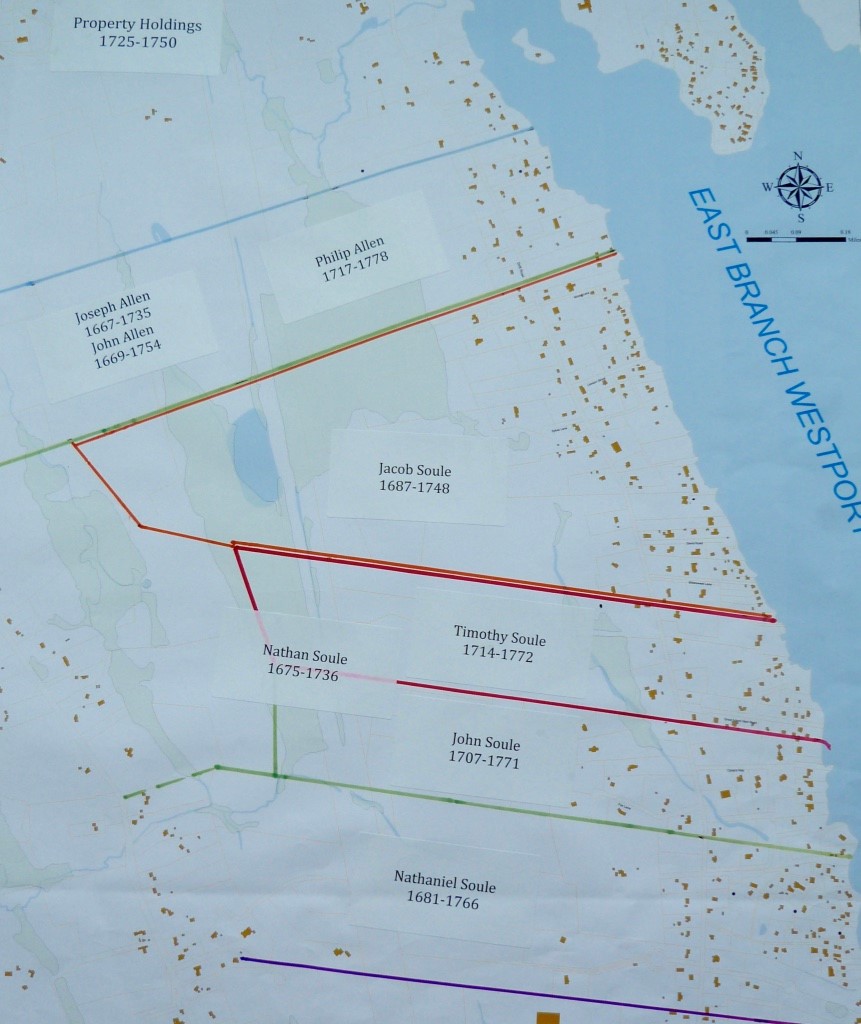 In Figure 2, the main property lines from the Henry Worth map are superimposed on a present-day Westport Town GIS map which shows that some of the original boundaries are still found on these modern maps. The Nathan Soule property was divided between his two sons, Timothy and John Soule. The J. & J. Allen property was owned by a son, Philip Allen. 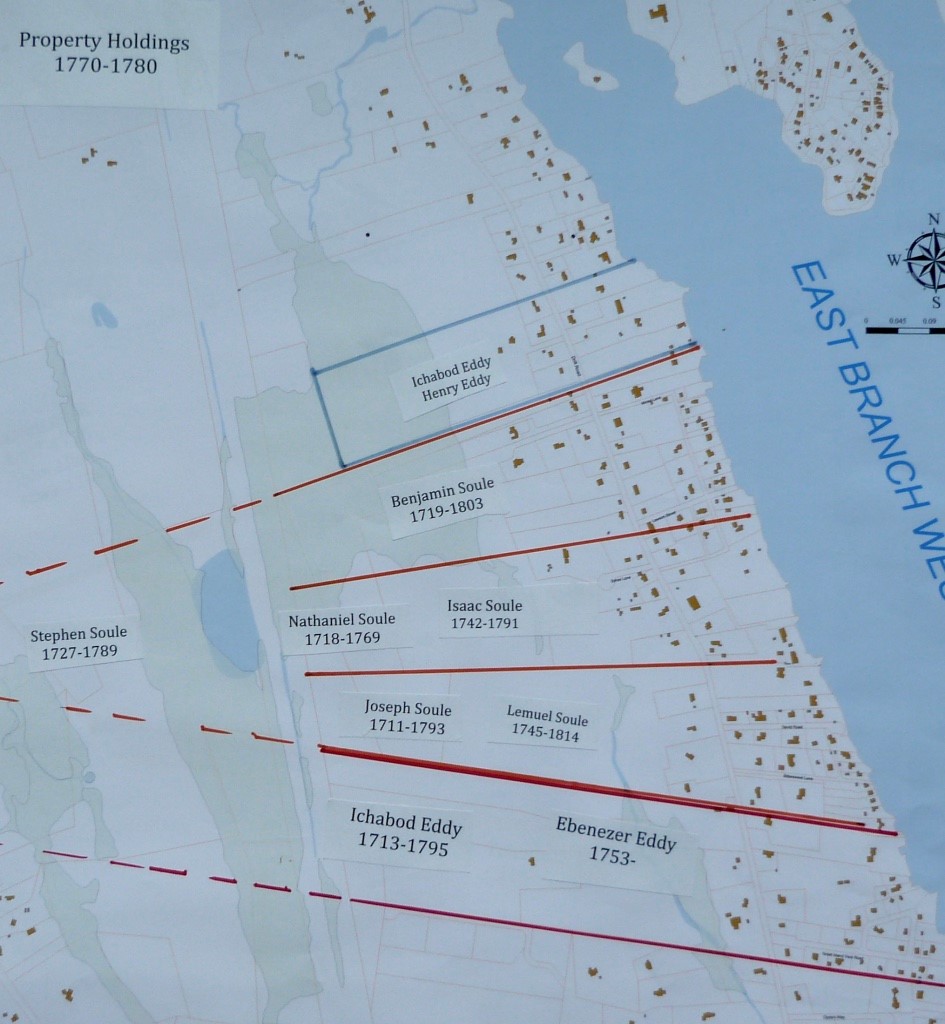 Towards the end of the 18th Century, Jacob Soule’s homestead was divided among his four sons, Benjamin, Nathaniel, Joseph, and Stephen.[16] Subsequently, Nathaniel’s property passed on to his only son, Isaac, and Joseph’s to his only son Lemuel. Isaac Soule and Lemuel Soule owned these abutting homestead properties in 1790.  Paul Cuffe made his first purchases of 35 square rods in 1789 from Isaac Soule and his second purchase of and 15 square rods in 1800 from Lemuel Soule.[17]

Isaac Soule died in 1791 and bequeathed his property to his wife, Sarah, and three children, Phobe, David and Nathaniel. The property was not actually divided among them until 1807, with the division as shown in the map below.[18] At that time, David Soule’s property abutted the river and Paul Cuffe’s 35 square rod property to the east.  In 1813, David Soule sold the 4+acre property (the cross-hatched portion) to Paul Cuffe.[19] This became the totality of Paul Cuffe’s homestead at his death.  That property is presently listed in the Westport GIS as 1430 and 1436 Drift Road and is owned by one family.  There are no historic buildings on that property.

The Lemuel Soule property – between the Cuffe and Wainer homesteads 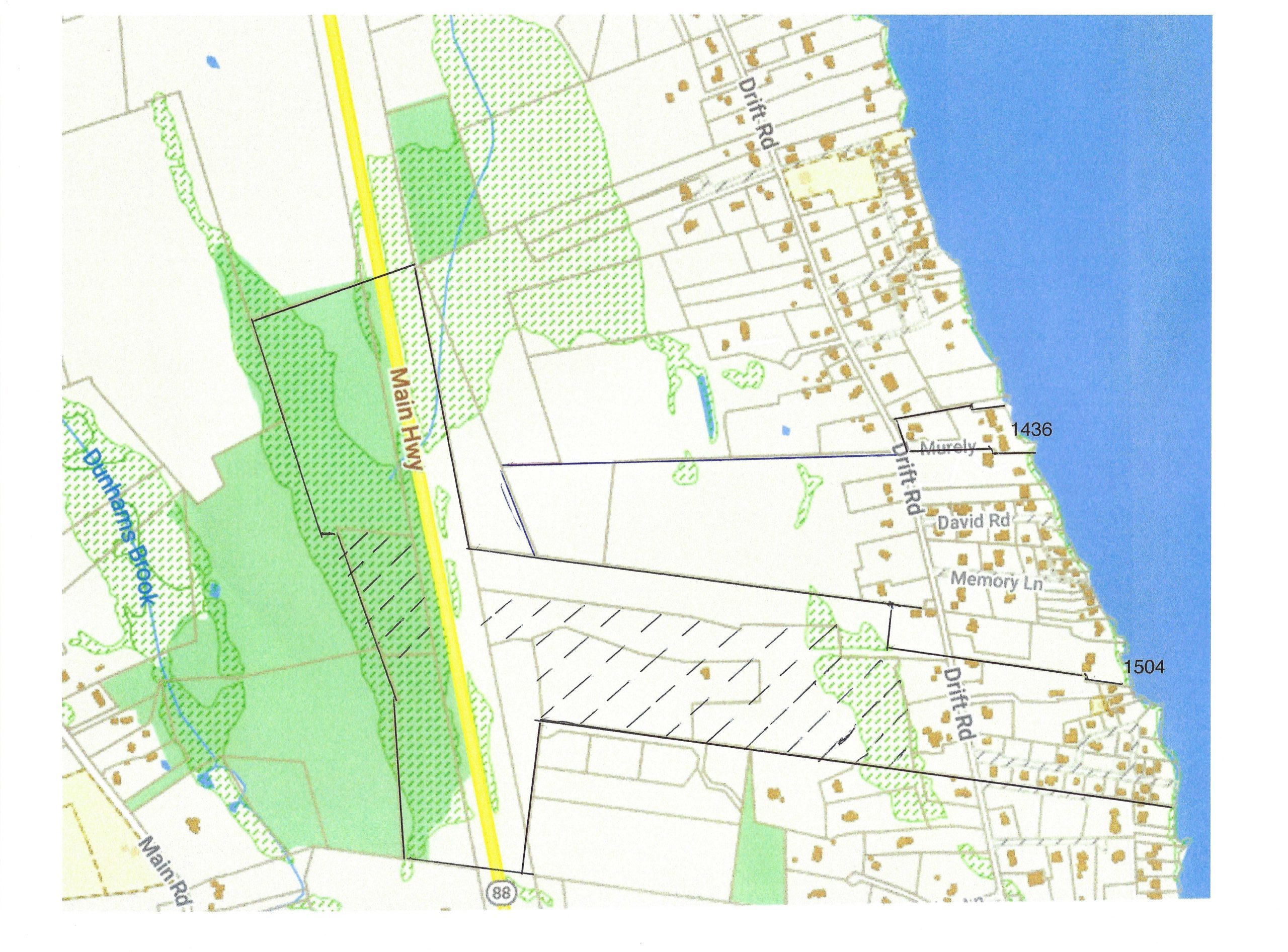 Figure 5. Wainer Farm, Tripp properties and Paul Cuffe Homestead, 1813.    Map of Shoreline of the East Branch of the Westport River showing the Wainer farm property as outlined, the current segments of that farm now owned by Wainer descendants as cross-hatched, the Paul Cuffe Homestead at 1436 Drift Road and the Tripp Homestead at 1504 Drift Road. The Tripp Properties lay between the Cuffe and Wainer properties.

The property that now comprises the two parcels at 1500 and 1504 Drift Road had a long and complicated history before 1800 when it became of interest to this discussion of the Paul Cuffe and Michael Wainer properties. All these properties were originally part of the 1/34th share of the Dartmouth Propriety granted to George Soule, an original Mayflower settler. In 1708 George Soule’s two sons, Nathaniel and William, divided up these properties that they had inherited from their father among their six sons and one son-in-law, Joseph Devol.[24]

Mary Soule Devol sold the western portion of this property to her brother, Nathan Soule, for 190 pounds in May 1732[26]. She sold the eastern portion, the same month, to Edward Howard of Newport, a ships carpenter, for 130 pounds. The latter property abutted the river which probably made it especially attractive to a ships carpenter or ship builder. The northwest corner of this property was 92 rods or perhaps 1,600 feet from the river which indicates it extended beyond the Drift way, which is roughly 1,100 feet from the river at this point.

The Westport Historical Commission document relating to the property at 1504 Drift Road attributes this property to Tillinghast Tripp and suggests that the original house was built in 1780. At that time, the property was owned by Daniel Tripp who had perhaps just inherited it upon the death of his father, Caleb Tripp. If the suggested construction date is correct, it would seem more appropriate to refer to this property and its house as either the Caleb Tripp or Daniel Tripp residence.

The property at 1504 Drift Road never belonged to Paul Cuffe or any of his relatives. It did belong originally to Soules and then to a succession of Tripps beginning with Caleb Tripp in 1748. An original part of the house may have been built in the 1780s, as suggested by the Westport Historical Commission, but at that time the property was owned by Daniel Tripp not by his son, Tillinghast Tripp.

[5] We have not been able to locate this newspaper article cited by Myrna Harris. She was not able to give the actual citation to the Poor Bill’s Almanac at the time.

[7] Paul Cuffe and his brother John Cuffe inherited their father’s farm located at 761 Old County Road.  The house that had been their when they owned it was replaced in the 19th century.  Paul Cuffe lived there in his youth, divided the property with his brother and retained his part throughout his lifetime, giving it in his will to his oldest son, Paul Cuffe, Jr.

[8] These messages are contained in the National Registry file cited in footnote 2.

[14] The Field Notes of Benjamin Crane, Benjamin Hammond and Samuel Smith, Reproduced in Facsimile from the Original Notes of Survey of Lands of the Proprietors of Dartmouth. 1910, New Bedford, Mass. New Bedford Free Public Library. The

Benjamin Crane Maps are based on the Field Notes and were created by Henry Worth. This map is extracted from one of the Worth maps.

[25] The recorded length of this parcel, 376 rods, is probably in error as that would be equal to 6,200 feet or 1.17 miles, much more than the total length of the whole property.