An overview of images that have been used to represent Paul Cuffe by Carl J. Cruz 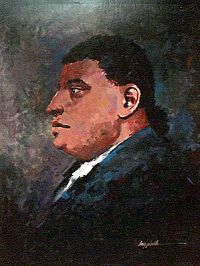 This Portrait, oil on canvas was commissioned in 1989 by the Hall of Black Achievement at Bridgewater State University. The Artist is Larry Johnson an African-American illustrator. Mr. Johnson used the 1812 silhouette as his model and brought this realistic image to life.

View slides from this presentation HERE.

View video of this presentation HERE.

“he was “both tall and stout” spoke good English, and dressed “in the Quaker style” that is, he adorned “a drab-colored suit” with a large “flapped hat”.  Thomas Clarkson, The History of the Abolition of the Slave Trade 1808

“His person is tall, well formed and athletic; his deportment conciliating, yet dignified and serious.” Liverpool Mercury 1811    “Memoirs of the Life of Paul Cuffee, the Interesting Negro Navigator” 1811

“I was pleased with the profile of Paul Cuffee-it is a striking likeness of him…” Stephen W. Gould 1822

“Paul Cuffee is tall, well formed and athletic; his deportment conciliating, yet dignified and serious.” Memoir of Captain Paul Cuffee, A Man of Colour, Wilson Armistead 1840

“Paul Cuffee was in person well formed and prepossessing — tall and athletic — of noble bearing.” William J. Allison, The Non-Slaveholder 1850

“Paul Cuffee, or Cuff is represented to have been a man of noble personal appearance, tall, portly and dignified in his bearing.” Daniel Ricketson, History of New Bedford 1858

“He is described as tall, with straight hair, of light complexion, with dignity of mien.” Zephaniah W. Pease, History of New Bedford  1918

“Of medium height, stocky tending towards portliness, fashionably dressed (for a Quaker), he looked every inch the country squire except for his skin color.” Sheldon Harris, Paul Cuffe Black America and the African Return  1972

“Paul was unmistakably both African and Native American in physical inheritance. He was big enough to stand out, and he dressed in his sober Quaker grey and wide-brimmed black hat, he was impressive.”  Rosalind C. Wiggins, Captain Paul Cuffe’s Logs and Letters,1808-1817   1996